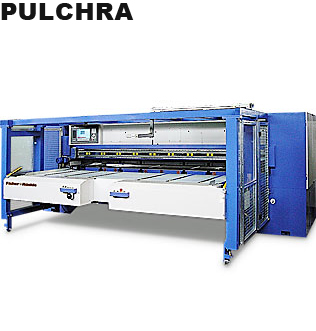 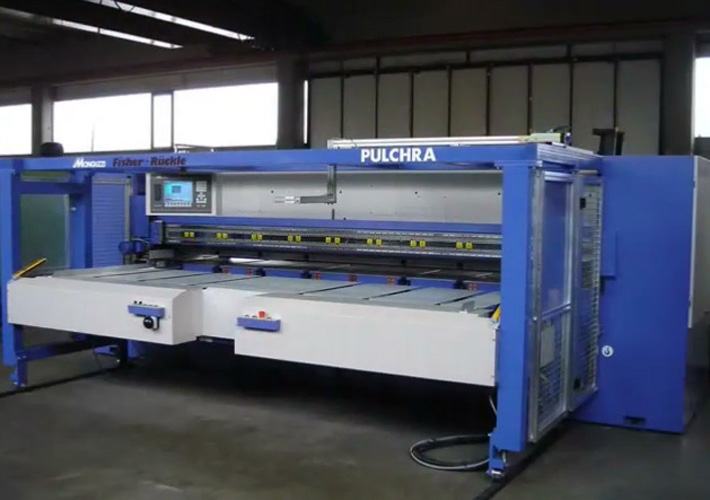 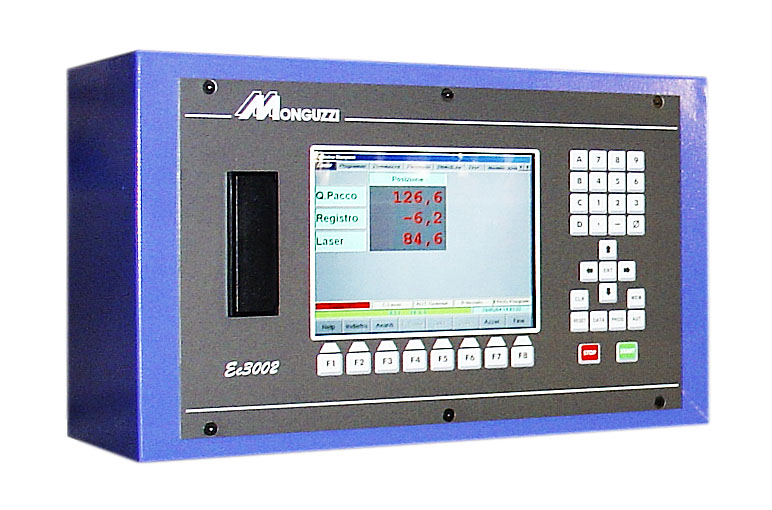 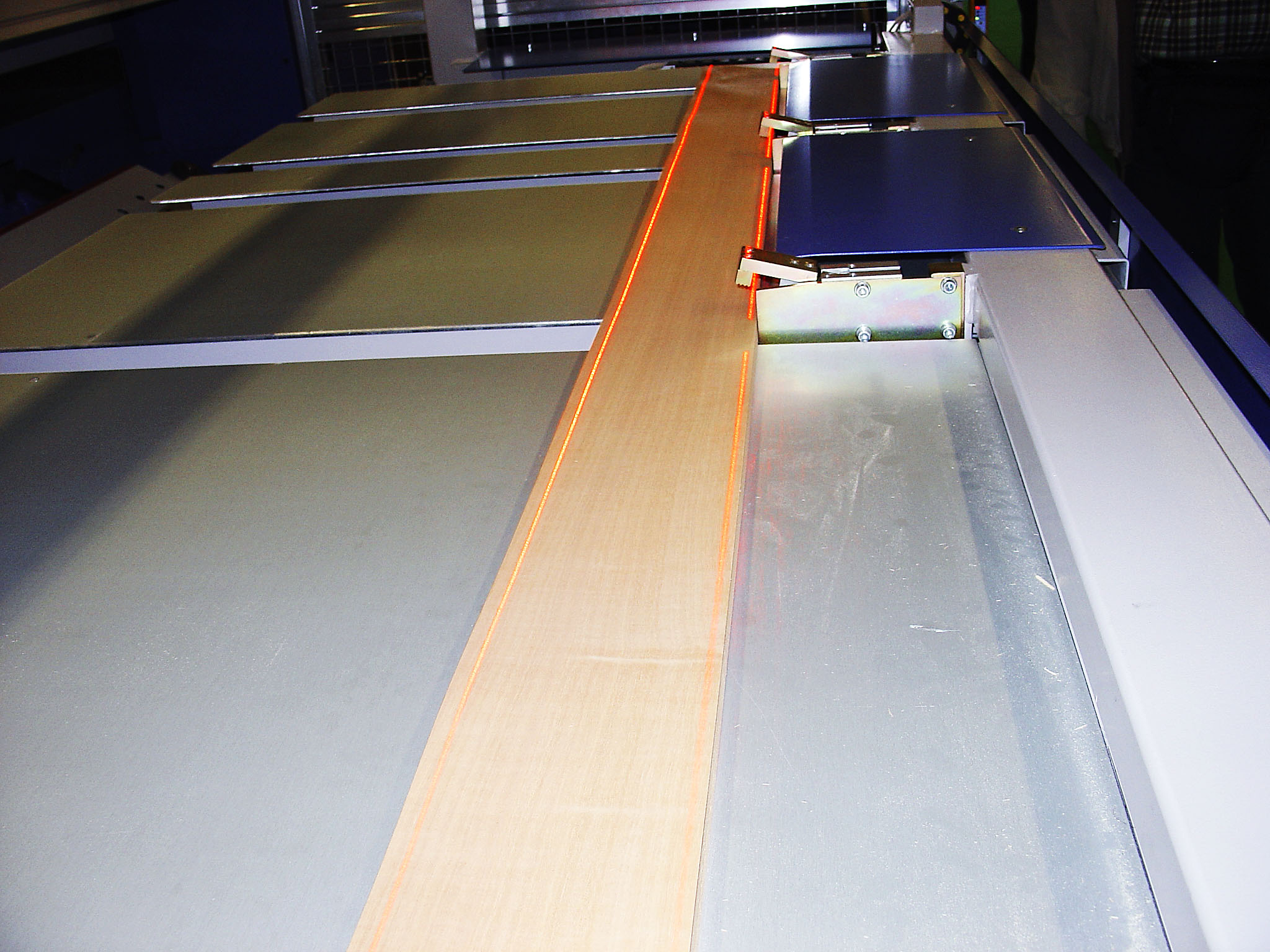 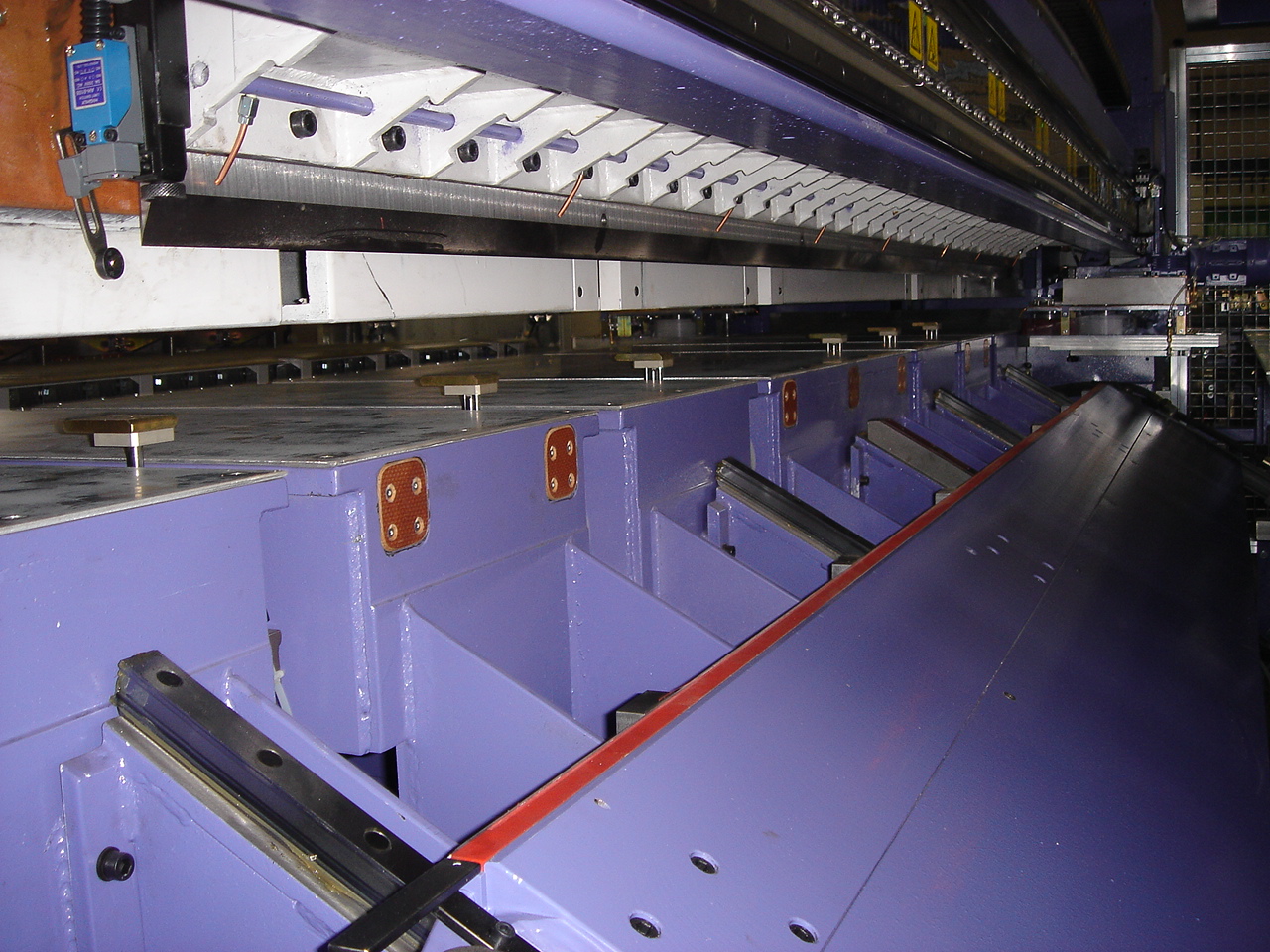 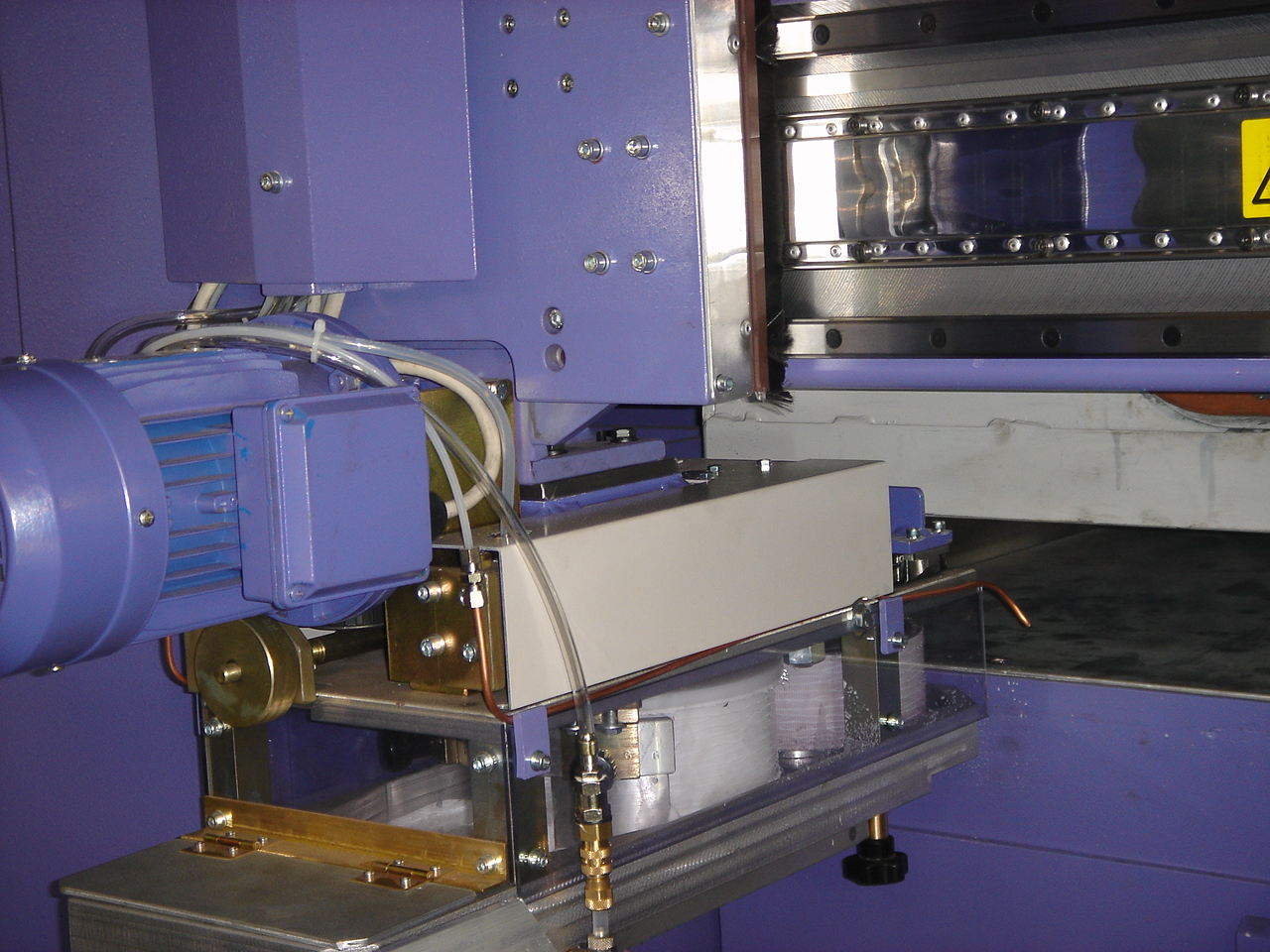 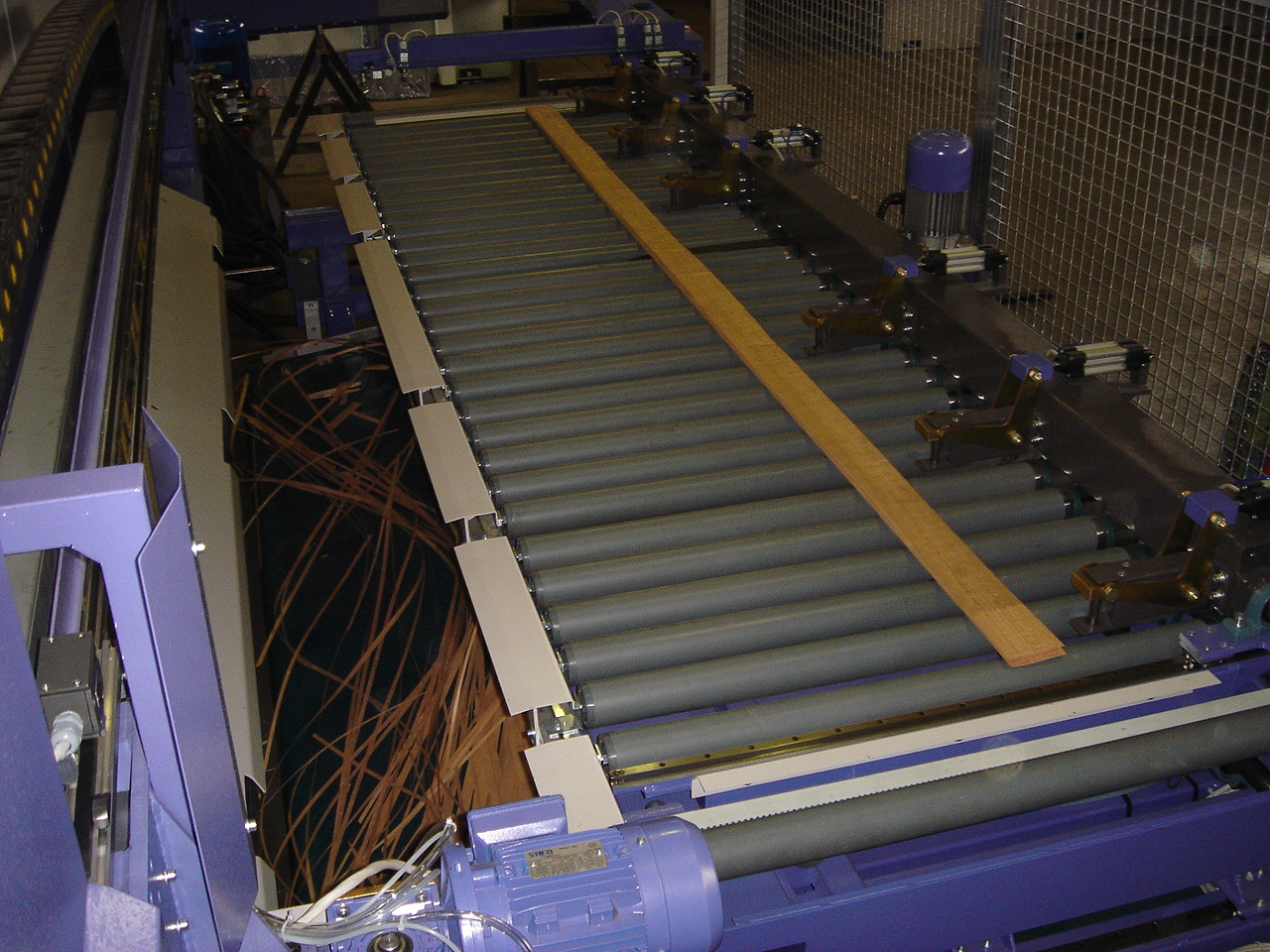 The veneer bundle is manually placed on the pre-feeding device and aligned on the gripper shafts. The grippers firmly clamp the veneer bundle as a pre-set laser line illuminates the position of the front knife.

To optimise veneer yield, the manually operable laser line for the positioning of the back knife is quickly and exactly set and the data transferred to the computer at the push of a button. The following processes run automatically.

The gluing roller (4) now quickly applies the chilled glue on the complete bundle’s edge in a clean and gapless fashion by travelling along the clamped bundle. The bundle keeps being pressed between the cutting and glue application processes. The grippers now position the veneer bundle at the rear cutting position. As the rear pressure beam lowers to clamp the bundle, the grippers retract und the rear knife cuts to width with optimum yield.

The rear gluing roller then evenly glues the edges of the veneer bundle still firmly clamped. After gluing, the rear pressure beam releases the veneer bundle before the grippers of the automatic discharge system (5) deliver it to the roller conveyor for angular outfeed to a fanning station, for example FANNINGMASTER (7).

The veneer bundle is manually placed on the pre-feeding device and aligned on the gripper shafts. To optimise veneer yield, the manually operable laser helps position the back knife. The maximum attainable veneer width is thus set and transferred to the computer at the push of a button.

The pressure beams press the veneer bundle in a single clamping both for cutting and gluing. The veneer bundle is being cut and glued directly afterwards under constant pressure. This ensures gapless glue application which is specifically useful when processing buckled veneers. The front and rear pressure beams work individually in continuous mode, whereas they work simultaneously in single mode.

Both knives cut the veneer bundle in a straight and exactly parallel line. The swinging knife movement trims the veneer edges clean and square-edged. The knives cut against a flexible plastic strip.

The glue application heads efficiently apply the glue in both traverse paths. Glue application occurs within the same clamping as the cutting, thus ensuring even and gapless glue application, even with wavy and buckled veneers. Chilled, large volume glue pots allow for high operating times without constant refilling.

After cutting and gluing, the veneer bundles are automatically taken over by a discharge system and transferred to a roller conveyor for angular outfeed to a fanning station.

The built-in computer, based on a Windows operating system, allows for a selection of programs and operating modes. The positioning control based on a micro processor with storage function for the most common widths accounts for economic optimising of veneer yield.

For the fanning of pre-glued veneer bundles both in grain and cross-grain direction, thereby keeping the veneer strips from sticking together. The FANNINGMASTER is commonly used in combination with the GLUEMASTER glue application machine or the PULCHRA double-knife jointing guillotines with built-in automatic glue application. Automated production lines typically rely on these machines.